Commentary*
As our community reels from crushing autism rates, a vogue for denialism threatens the desperate need for progress in science and policy 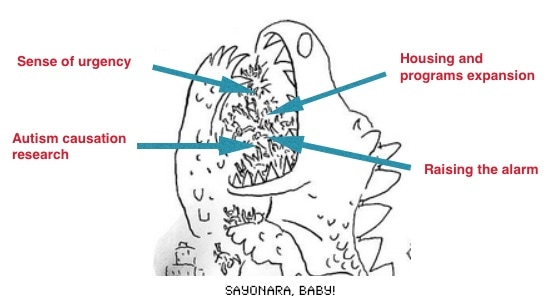 (First in an Autism Awareness Month series on Rethinking Autism)

The autism community stands at a frightening crossroads. In one direction I see an unmistakable surge in autism rates — up 20- to 40-fold since the early 1980s according to California data reflecting only the more severe cases — classrooms overflowing with autism spectrum disorder (ASD) kids, seasoned clinicians boggled by the influx of ASD, adult programs bursting at the seams, social services systems hitting their breaking points, a study showing that autism’s burden on the American economy could exceed 3% of GDP in ten years, and a veritable ocean of panicked families facing increasingly uncertain futures.

But in the other direction, I see something quite opposite — a growing vogue for skepticism. Not just skepticism, but sometimes an entrenched and smug dismissiveness about the growth of autism, a dogma-pounding assuredness that that this epidemic is nothing more than a mass delusion. I call this trendy mythos “The Complacency Monster that Ate Autism.” And he is popping up everywhere.

He’s a favorite subject in an autism research weekly. He is adulated in commentaries in medical journals. He is glorified in a pop science tome exalting autism as a “gift.” A cabal of bloggers and tweeters love him. In policy circles, he lurks in the background of threatened closures of programs and housing. He’s even an honored guest at the IACC, which advises federal agencies on autism-related funding and policy. Every day he chomps away, the Complacency Monster undermines the urgency needed address our explosion of autism.

Indeed, if this flood of autism is merely outgrowth of better awareness, why bother funding research to hunt down potential causes? Why bother thinking about prevention? Why re-invent federal and state policies to serve the intensive needs? Why fund more adult programs or supportive housing? These disabled adults existed in these vast numbers and we’ve never noticed a crisis before, right? Indeed, why bother doing much of anything other than maybe finding some risk genes and touting a civil-rights-ish mantra of acceptance and inclusion?

These are scary times—we autism families have so much to lose. But let’s admit the Monster did not emerge from nowhere—there are some (at least partly) understandable reasons for his existence. Let’s understand them better, and then end with some good news.

Beginning in the late 1990s, a vaccine hypothesis to explain the mysterious surge of autism spread like wildfire and scared many parents away from vaccinating their children. The scientific community quite rightly circled its wagons to reassure the public that vaccines did not cause autism, both to protect the integrity of autism science and moreover to protect the public health from the ravages of preventable infectious diseases. One of the tactics that emerged to help quell public alarm, and perhaps due to exasperation with the enduring Hydra of the vaccine blamers, was a growing tendency to deny outright that autism rates had grown at all. I have some sympathy for this rationale—it is urgent that our children be vaccinated, and strong narratives help drive public health progress. However, the irrelevance of vaccines to autism in no way undercuts the reality of rising rates. We might as well say “Almonds don’t cause autism, therefore autism hasn’t increased.” It’s illogical and unnecessary, albeit an artifact of good public health intentions.

In spite of vigorous attempts, research has failed to uncover significant environmental causes for autism, aside from factors with small population effects, such as advanced paternal age and prenatal factors such as anticonvulsant medications and prematurity. Without compelling environmental explanation (as with the Zika virus fueling the microcephaly epidemic, for example) why should we be open to the idea that autism rates have truly grown?

Well, this may sound strange, but I believe we’ve barely scratched the surface in environmental research. Autism science has so far overlooked a goldmine of potential environmental factors — including exposures to the germline, the DNA and associated biological factors in the parental gametes. Silent glitches imposed in a parent’s germ cell can impair a baby’s neurodevelopment, a dimension of risk that strikes me as obvious (visit my science education website to learn more) but has not yet made many inroads into conventional autism research. And there are other nascent hypotheses, relating to gene-environment interactions and immune dysfunctions. With a veritable continent of causation research ahead of us, the absence of smoking-gun findings to date should hardly justify any scientific defeat or ennui.

Research shows that autism is strongly heritable. For example, there is high (about 70-90%) concordance among identical twins, and siblings of a child with autism have about a 20% risk of also having autism, even though autism is seldom found up the family tree. But the findings have fed a simplistic sense that since autism is heritable it must be genetic.

“Heritable,” however, does not equate to “genetic and handed down through the generations.” Autism is by no means a conventional genetic condition. Heritability can and does also result from “de novo” or new errors in DNA itself, or in the instruction book chemical tags and codes that determine how genes are expressed. Some of these “epigenetic,” “regulatory,” or “non-coding” drivers of gene function are vulnerable to toxic exposures such as tobacco or drugs, and can be newly inflicted in gametes (per above). This genome-tampering is why, contrary to popular opinion, you can in fact have a “genetic epidemic.” Evidence of heritability among siblings should raise alarm about environmentally induced impairment, but to the parental gametes, and not so much to the ASD fetus itself. Heritability of autism provides no rational basis for denying an actual increase in cases. 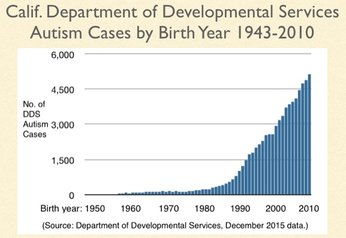 4. Hype around Social Factors—Overblown and Unquantified

The most repeated argument in autism denialism is that the increase in autism prevalence results from social factors such as broader diagnostics, better awareness and acceptance, and increased access to services, and not from any actual increase in the rates of neurodevelopmental pathologies. Much hay is made over the fact that the DSM, or Diagnostic and Statistical Manual of Mental Disorders, has tinkered with criteria, supposedly opening the floodgates to mild cases that would have been ignored or otherwise diagnosed in the past.

While some cases of mild autism or cases once labeled “feeble-mindedness,” “mental retardation,” or “childhood schizophrenia” in the past are now just called “autism spectrum disorder,” no study shows these shifts account for the explosion in significantly disabling autism we see today. Rather, the tendency is to project this explanation onto the data without actually quantifying the effects, so we could have 100,000 or 200,000 or 300,000 or a million autism cases here in California, and this boundless logic would be used to justify the entirety of the explosion.

Here in California, by the way, our autism population in the developmental services system (DDS) has grown from about 2,000 in 1980 to a staggering 91,000 today. DDS only serves residents with substantial developmental disability; those who are mildly affected are denied entry. Several reviews of DDS data during this growth surge have found that social factors could not account for the increase in this strikingly disabled population. Indeed eligibility criteria were made more stringent, not broader, over this timeframe. Nonetheless the denial-prone are quick to blame soaring DDS autism rates on social factors. Social and labeling factors, while worth noting as a contributor, have been overhyped as a rationale for the autism increase.

While there are plenty of other pressures bending some toward denialism (scientific groupthink, the politics of grant-chasing, the unbalanced burden of proof, for example), I’ll wrap up by addressing the ascension of the neurodiversity movement. I actually adore many things about neurodiversity and love how it promotes acceptance and empowerment, Hey, ten thumbs up for Sesame Street’s new muppet with autism, Julia.

But let’s draw the line at biology. Like hearts and lungs, brains are biological organs. When a child has a hole in his heart, we cherish the child but hardly celebrate “cardio-diversity.” The scientific literature is now replete with findings of pathological neurobiological phenomena in autism, including impairments in neural connectivity, dendritic pruning, and synaptic functioning, among others. Increasing prevalence in serious brain pathology causing significant to profound disability (my two kids with autism, ages 18 and 11, are nonverbal and function at preschool levels, for one sobering example) represents a monumentally serious human crisis that should never be sugar-coated or mis-portrayed as mere flowering of supposed brain diversity.

But what, do I see rainbows on the horizon? Like the Bad Witch melting in Oz, it seems the Complacency Monster may be headed for certain demise. I regularly get emails from community leaders and researchers concerned about the lack of progress and forward-thinking about the adult autism crisis. Our heroes in the services sector, smothered by their growing caseloads, are begging to be heard and pleading for relief. Autism advocates around the country are developing new ideas for reform, sick of the kumbaya nonsense and ready to fight for our families. Each day that our crisis grows, the Complacency Monster seems more and more absurd. As an autism dad friend said, its position is “like standing on the train tracks and arguing about the speed, color and the driver of the train that is going to hit you.”

Jill Escher is president of Autism Society San Francisco Bay Area, an autism research philanthropist (Escher Fund for Autism), a provider of housing to adults with developmental disabilities, and the mother of two children with nonverbal autism. She can be reached at jill.escher@gmail.com.

*This post has been reproduced with permission from Jill Escher and the Autism Society San Francisco Bay Area.